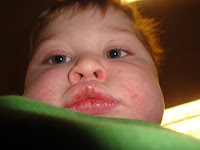 Gary had a check up with the rheumatologists today.  Overall, I think the appointment went well.  I have 2 sisters.  We are close.  I find myself to be a bit more confident when one is at my side.  If both are at my side well, you really just don't stand a chance.  Today my younger sister came with us to the appointment.  Words flowed and points were proven.  In the past couple of months I kept getting the notion that Gary was just doing fabulous from the doctors point of view.  My view is that he is doing well, but not at level that would make me unzip my bag and pull out the pom-poms.  In fact in pervious posts I tried communicating that I was a bit on the frustrated side.  Ahhhh the nature of the disease.  They should label "frustration" as  a symptom.  A few weeks ago, Gary's labs came back great.  Mostly normal.  They were happy about that.  I was and was not happy about it.  Despite great levels, he has active skin rash.  Not just the typical JDM rash, but just really colorful, active skin.  On his tummy, the back of his neck, his face and bruising underneath his arms.  Despite levels, he looks like a patient with active Juvenile Dermatomyositis, drug dependant to keep it from doing some real damage.  Tender red hot cuticles that only improve for a moment after IV steroid infusions.  I feel like at today's appointment they finally really saw what I have been seeing.  I can't understand why this makes me feel......accomplished.  It shouldn't.  Do I want to hear that he is fighting it, of course not.  Do I like the worried or concern they seemed to show with everything he has going on, NO I don't.  It makes me want to cry.  But it is a comfort they understand just what I am talking about.  Gary is presenting some weakness.  The reflux that children do when you lift them up underneath there arms has declined I would estimate 60 percent, if I had to put a number on it.  With this weakness returning, it causes damage under his arms.  You can see our finger prints bruised into his sides.  The doctor described it has vasculitis.  Vasculitis is the inflammation of the vascular system.  Not that veins but the tiny capillaries.  (As I understand it.)

This is what the internet says about it.

Vasculitis (vas-kyu-LI-tis) is a condition that involves inflammation in the blood vessels. The condition occurs if your immune system attacks your blood vessels by mistake. This may happen as the result of an infection, a medicine, or another disease or condition.

Gary was done, but the appointment was not.  He would not let the doctors touch him.  Hitting, spitting, kicking, whacking, and smacking come into play.  So Mommie took over the exam.  We were trying to get him to open his mouth which is never very successful.  But this time Mommie layed him back on her lap and said, "Say Aww".  They got a clear shot!  On the roof of his mouth was the same vasculitis looking rash sort of thing that the doctor saw right away and pointed out to the other doctor.  I had noticed that a week or so a go when he had taken a sip of orange juice, it stung.  Some of his medications can cause mouth ulcers.  I went looking around in his mouth for the mouth ulcer.  I did not find one, but did notice the roof of his mouth looked funky.  I don't know what I am looking at so I wasn't alarmed.  I especially don't know what the roof of my own mouth looks like.  Do you know what yours looks like?  Me either.

So as of right now, we watch.  We have upped all his med's and that was only 2 weeks ago.  They want to give those doses enough time to take full affect.  I couldn't agree more.  I told them I would just keep watching closely.   It's that whole, "Hmmmm" look they leave the room with that is just so..................interesting.
Posted by Erika Bradford at 11:56 PM