Merry Christmas to everyone.  The Rituxan went good.  Gary didn't seem to have any ill effects from it.  We are scheduled to go back in for our second round on Monday.  Gary will be there overnight.  Hopefully we will get our own room, but most likely not.  Last week it was interesting.  We got check into our room and the patient that was already in there immediately complained.  I was a little shocked.  I told our nurse, who I could see right through and knew right away when that mother popped up out of her bed and headed straight for the nurses station that she was going to protest.  Her daughter was older (13 maybe).  I get it.  Gary is chatty.  But the part that floors me is the less than ideal rooms we have been put into over the past year and half, including being accidentally stuck in with a contagious patient.  I would express my displeasure, and not once did they move us. OK once, it was when we were in with the poor kid who was having loud psychotic hallucinations about The Grinch.  That time I didn't ask they just moved us.  I so badly wanted to ask that Mom what she said.  I also know however, the nurses were not happy with her.  It came up several times because we moved rooms certain things were still back at the original room.    Anytime it was mentioned a certain regard came off of each nurse.  The upside was we did get our own room for awhile.  We also had a window.  Down below our view included the Seattle Fire Department practicing drills on the vacant condo's below.  Yay for the Children's Hospital Expansion!  I pray that no patients will have to share a room again.

Gary is looking pretty good.  I thought earlier in the week that some of his calcinosis was coming through his skin but it ended up being a infected molluscum.    I do think it has calcinosis under it but I was kind of upset there for a few days wondering if this was the start of the pain of these popping through.  The dermatologist has stopped treating the molluscum.  He did recommend trying an online remedy, Molluscum Rx.  It's a little pricey so I am not sure.  One of the things I have started to consider is a gluten intolerance.   I struggle with this because I do.  It will be hard.  But I figured I will talk to the doctors and see what they say.  I guess the reason is because so many times I have been offered advice about Omega Three, fish eyes balls, things of that nature.  It has all been taken with appreciation. However.  This disease is serious.  It can be compared to cancer in my opinion.  My mind is closed to any kind of natural care and things like that.  What if I did and his disease advanced?  What if it didn't work?  There is a person on a support board who is always pushing some kind of product.  He pushes it to the point it is offensive.  Asking us parents 'how dare we not explore other treatment and put the terrible drugs into our childrens bodies when he has found something that works', not a direct quote but it is how he made me feel.  What if we all followed what you were insisting on?  This disease proves that no ones is the same.  Each case is a little bit different.  Each patient responds differently to each medication.  I understand you would want to share what worked for you.  I would too.  But to play upon the fear in parents is crude.  And what every patient did what you are so passionately pushing or "selling".  I can guarantee a lot of children would have disease progression along with all the complications that come with JDM.  I suppose it is all about approach.

I know I need to open my mind more.  I also consider that fact that this isn't my body.  It is his.  It's Gary's.  It may be a little different or maybe something I would try if it were my own.  But Gary would have to live with whatever decision I make for him.  He already does.  What hard way.

Merry Christmas to you!

Merry Christmas Summer : )
Posted by Erika Bradford at 7:05 AM 1 comment:

The back to back stomach bugs aren't a good thing. Obviously.  They had us come in today for a clinic appointment this morning.  It was decided on Friday to go ahead and run Rituxan again.  So we are here overnight getting a Rituxan infusion.   Labs don't always tell the whole story. 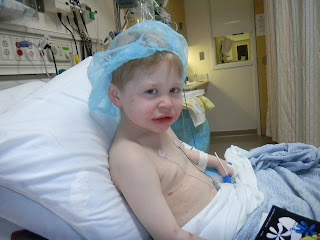 Wow time is marching.  We had our clinic appointment last Tuesday  and our IVIG infusion the next day.  The clinic appointment went fine.  We are keeping all medicines and doses the same for awhile.  I would describe it as a holding pattern right now.  Just waiting to see what happens.  The doctors and I agree.  Not good enough to stop steroids.  The inflammation is just there still.  Despite really great labs, I can't confidently say were good to go down.  The infusion was a little rough.  This time we tried new things.  We tried a little sedation for the ride in and for getting the IV.  Several reasons this was no good.  He couldn't walk into the infusion center on his own.  He fell of the scale when being weighed.  It did help with the IV start, but he still cried, just cared less.  As soon as they ran the benadryl thru his IV, he was furstrated.  It hit is balance hard.  He was out of it and could not stand up on his own.  It was too much.  Feeling icky and sick like that was not what I had in mind to make the IV go easier.  The next 3 days proved to be difficult as well.  That night he cried and cried and cried.  He was in complete misery over everything.  Uggghhh.  Forget it.  No medicating for IV's.  We will just have to find other means to cope.

The other new thing we tried was the infusion center.  We were booked into a new infusion center which was off campus of Children's Hospital.  We only had to go to Bellevue.  I liked that is was closer, quieter, and new.  I didn't like they didn't serve lunch.  It didn't hit me until we pulled up.  I am more than happy to pack a lunch for next time however.  It was also nice because we had the place to ourselves which meant we almost got the nurses full attention.  They were great.  One of them sat with Gary while I went to get him food for lunch.  They had a movie on demand system which was good, but once we got thru all the movies, he got restless.  Of course he fell asleep at the end.  For the first time in a year and half, after countless infusion, Gary did not wake up while having his IV removed.  Sedation gripped him hard.

LABS
Last month I had asked for them to check his B cell count, to see if those cells responsible for inflammation were coming back yet.  If they were, then Rituxan would be given again.  They had explained it was still to early.  I told them I wanted them checked because there was a overall inflammation I keep noticing in his hands, face, and skin.  They went ahead a checked them this month.  They are indeed back.  So in a few weeks we will be getting another round of mice medicine.  (I call it that because Rituxan has mice dna stuff in it. I know gack) .

TUMMY BUGS
Last year we made it thru the flu season with flying colors.  Nothing.  Gary did not really catch anything.  This year is proving to be different.  I wonder if it is because I am becoming a little more relaxed with his exposure or what.   Nov. 13 he threw up and was sick.  Recovered quickly.  3 days later another round of throwing up hit him.  He once again, recovered quickly.   Dec. 9th (Last night), he began throwing up again with tummy cramps.  That makes a three peat.  Hmmm.  I did have a little run of it a few days after he did last month so I was sure it was a tummy bug.  But 3 times now for him.  The good news is he seems to recover quickly.  Both times he has held down his important medicines so no hospital visits.  I knew yesterday something was up.  He was quiet and complained of a headache.  He did the same thing last month as well.  I few days before, I knew something was wrong or brewing because of his behavior.  Poor little boo boo.
Posted by Erika Bradford at 9:52 AM 1 comment: