Gary has taken an interest in his blog......in the past I have used it for an outlet for myself.  As a mother, it served me.  It helped keep my thoughts straight......it released any emotions whether they were happy or sad.  It was also a great way of keeping track of how he responded to certain medications.      I think it is time for Gary to start contributing :)........it might take away from his video game time but I think it will be good for him and for others to read his point of view.   So Gary if you are ready this......get ready.  We can do it this Friday during your infusion maybe?
Posted by Erika Bradford at 10:14 AM No comments:


O how I missed my blog.....
It’s not I forgot about it but after reading over a few entries in the past I thought wow, I hope he finds this useful when he grows up.   Not too mention any families that stumble upon it. 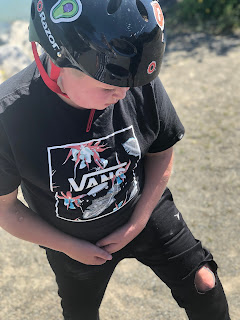 Let’s get caught up.  Ladies and gentleman, welcome to the PRE-TEENS.   Gary is 6.5 months away from turning 13.     The age of 12 as found us not exactly like any other twelve year old, but pretty close.   He even would rather hang out with his friends.   He is testing life.  Trying features out of his personality.   Anything from being a total jerk, to very polite.   He is on the go.  Physically he doesn’t match up to his age group but who does?   Some are bigger, some are smaller, some in between.    He is very social.   So social school work is just a small obligation he really isn’t obligated too.     Video games and phones are a big part of ever evolving social world.   Drives me crazy 😝.   He loves to wear lots of cologne and talks of piercings and hair colors.  (Over my dead body.).   I recently have returned to home so I get to be there with him more.   (I didn’t move out or anything just was working full time so we didn’t see each other much.  Infusion Fridays we often looked forward to because we got the whole day together.   Fortunately and unfortunately all at the same time, I have returned to being his full time Mom again.  A surgery on my knee to repair my ACL and meniscus trying to teach him how to ride a skateboard (one wheel) really changed the direction of my life.  A few things I’m sad to leave behind, but being here is what really counts for our whole family.  Everyone says I will be back......I know that.   But it won’t be in the same capacity as the old me.   I have another surgery coming up on the same knee which seems like a further set back but.....just
going forward.

[Major shout-out to all Moms who work full time especially when there is medical worries present.  I am not gonna throw out the good ol’fashion “I don’t know how y’all do it” but I suppose I just did.  I know how I did it.  I largely ignored my life.  My children, my house, my family all together I only watched out if the corner of my eye.   I was terrible about a healthy balance.  It was only my fault.  My boss would have done just about anything for me but what it required was a whole lot.  I give it my all.  Hard working and dedicated, rug pulled out, I landed flat on my ass and I’m not even close to getting back up.].

So we have Gary’s 17 year old sister who just started her senior year in high school.   Gary’s older brother is 20, we see him her and there.  He lives with us part time.  Has a job and friends.   Gary made his way to 6th grade!   Middle school.......oh the anxiety and nerves he experienced.  But next week he will tackle his first full week and is doing great so far.

Medicine💊
So it seems the magic combo that has survived the longest so far (I think, I will have to look -we had a long run with Orencia-):    IVIG, Tocimizilab infusions......at home we are trying to get off of prednisone.   We are currently rocking a 2-2-1 pattern (milligrams per day).  So 2mg 2mg 1mg then back to 2mg.....you get the pattern.   It hasn’t been easy.    We made it to 2-1-2-1 but a few labs popped up and we went back up.   His calcium deposits are still slowly making their way out.....still.  Oh. So slowly.   His arms are left with scars but his appearance is way less noticeable then it was.....I will do another before and after post just on that very subject.  But his strength is great....his skin not much dermatomyositis at all.  I think his skin has a bit of scarring like he will look rashy but then it quickly goes away.  His nail fold capillaries are in recovery and have been for some time.  He is quite active.  He doesn't move the same athletic way as some of his sporty friends but I think he keeps up just fine.   And he may not be as tall as them but was he really going to be anyway?  We saw a doctor to possibly go on growth hormone (were talk ten plus years of steroids he has been on).  But has he has weaned off a little bit, he certainly has grown.

After 10 plus Years....applying sunblock has not gotten easier! 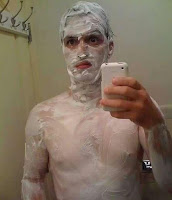 I use to have to chase him.  I would use my legs to try and keep him still.   Ok ok ok it has gotten easier but now he dislikes it in a more verbal way.   He claims I'm just trying to make him look like a clown.  Gary has to use a special sunblock because he has had past reactions to regular sunblock.  It is like my favorite thing to say.   He is allergic to the sun and sunblock.  I want to invent a sunblock mister....it goes over the front door.  It has a remote.  As he walks out into the sun, MISST   done      sunblock.     Oh and then their is his desire to be tan.    Come on winter!   I mean I imagine this picture is what it feels like to him.  Even hats mess up his hair.  Thank you teenage years.....I hope my son survives you.   Gary knows that he is very sensitive.  The minute he gets into direct sunlight, his face turns red and his lips and eyes swell.   Our relationship with his autoimmune disease and ten years of doing this......."I'm not going to the HOSPITAL with you!!"    Yep, Mom of the Year award right there.  I tell him over and over again.  I told him gently.  I have screamed.   I written it down.   I have everyone put it on, like when he was 4.  "See Gary, we all put the sunscreen on"
Posted by Erika Bradford at 3:35 PM No comments: