We are healing.  Thank goodness.

Gary returned to school last week on Monday.  He made it all the way to Wednesday.  Wednesday he barely made it in the door.

Things I Don't Like
Every day he would come home from school and run straight to the shower.  Why.  Because he kept his coat on all day because he wanted no one to see his elbows.  My son does not like to be hot.  Never has, never will.  But apparently in the name of not having to answer questions and being ashamed, he kept his coat on as the temperature soared.  I mean, it was warm for our part of the country.  But he has always struggle with being warm from the meds and the weight of the steroids.  So it kind of did break my heart a bit.

When Wednesday rolled around, his exhaustion set in.  The swelling of his elbow was up.  Instead of swimming in the pool and visiting with his Uncle who was in town, he went to sleep.  I decided that the rest of the week would be sent at home.  Resting.   Recovering.  Too much.  Too soon.

Sometimes I wish God would leave a note on the counter so I could read it in the morning.

Fortunately I felt the message.  It was exactly what I was suppose to do.  The antibiotic he has been on was completely necessary, but completely kicking his butt.  The next day was spent on the couch.  Not eating, just laying.  Just recovering.  I suppose I should have done that since Monday.  I feel pressure thought to make sure he is learning.  He had already missed all of last week.  I have already been talked to about him being held back.  (Yes, he is protected by a 504 or the IEP, but still they bring it up how they don't think he is ready to go onto to the second grade because he misses too much school).  At one point I have to let that go and know that it will all be ok.  It will all work out.

Taking the rest of the week off is just what he needed.  By Saturday his elbow was down in swelling dramatically.  By Sunday, he woke me up in the middle of the night to help him itch it!   I celebrate that because that means healing.  The other elbow that has calcium coming out is calming down a bit as well. 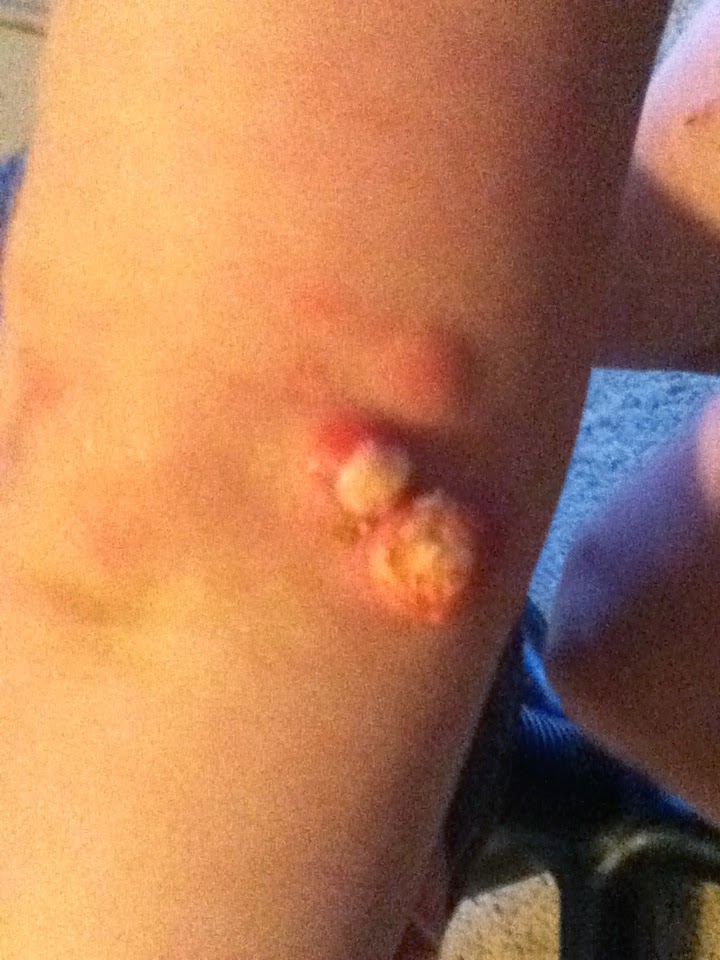 His surgery site from April 1 is looking very good!  I am happy about that.

HARD
After this last hospital stay, and in four days our anniversary of 5 years of JDM is here, my emotions have been, well, a bit raw.  I am having a hard time being away from him.  My heart hurts every second he is at school.  I fret quit a bit about how he is and what he is doing.  I even fret when he is next to me.  I think I may be experiencing some sort of syndrome since coming home from the hospital.  I act like, oh been there done that sort of thing, but it catches me.

One of my fellow Moms wrote earlier this month about the mortality of her child.   I think when our kids have been through what they have, it has to be somewhat natural.  ***Anyone can go at any minute doesn't help nor does it help***   I am aware that stepping out your front door could be your last step.   No one is promised tomorrow.  But sometimes that concept feels like a pie, with a few slices taken out.
Posted by Erika Bradford at 9:02 PM 1 comment: