*Woops forgot to post this.*
Ok.  That was terrible.
I thought a good night sleep would help me feel better about, but I wake up this morning feeling worse.  I feel somewhat selfish saying that.  I am not the one who get a needle jammed into my hand (well it was his wrist this time).  I am not the one who had drug slowly drip into me making me feel terrible.  But I am the mother who has to watch.
Our infusion clinic was recently remodeled. Yesterday I received a call asking if we could go to Bellevue instead.  I quickly returned their call and said sure.  Then thinking it over I changed my mind.  I wanted to keep our appointment because of the reaction Gary had last month.  He also had a slight case of the sniffles.  I called back and said sorry no, can't move appointments and we need isolation.

I was slightly worried when we arrived at 8am in the morning that our appointment would have been moved but it wasn't.  Up at 4:40am, out the house by 6:15am arriving at 8am would be not fun if we didn't have an appointment. 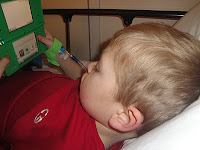 First order of business was the reaction Gary had last month.  The nurse didn't want to start anything without talking to the doctors. I did feel that the benadryl may have just worn off during the last infusion.  I explained if we ran the benadryl after the methopred then things may go smoother.  She was cautious though and really wanted to talk to the doctors first.  When she returned to our room, she explained Dr. E was on her way to talk to me.  She explained Gary may not be receiving Ivig and just methopred.  I was a little surprised by that.  I was not sure how I felt about that.  It's a weight issue.  Weighing disease activity verses side effects.  When the good doctor arrived I explained what had happened last month. 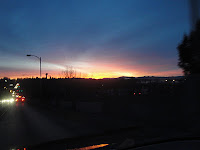 I was nervous about traffic that morning.  The route we take to the hospital now has a toll bridge on it.  So, to avoid the toll, we have to take the more traveled way.  I left as early as I could.  We made excellent time.  I know it won't always be like that but I was so relieved.   Not to mention the beautiful sunrise.  I wished we were going to the airport as we passed the exit.

Dr. E decided to proceed with the IVIG  but at 1/2 rate.  That meant 10 hours in the infusion center.  The IV start was terrible like it always is.  We are running out of veins on the tops of his hands.  The numbing cream was only put on the tops of his hands.  They found a vein in his wrist again.  During the iv start he started to try and vomit.  He told the nurses through his many tears that he hated his world.  None of the full grown adults who have experienced life and its good and bad times, did not like hearing that.  I think all of our hearts cracked a little.

Labs came back clear.  Meaning no extreme elevated levels.  He has one inflammation marker that is up and has been since February of 2011.  Our fellow doctor was starting to explain it could be up because of the cold he may have.  But she had to eat her words once we saw how it has been bouncing around for a long while now.  The doctors came to us again for our clinic visit.  This time however, it was a no go.  Gary was in no mood.

He actually seemed mentally disturbed.  It was crazy.  He would not let anyone touch him.  He screamed and told them to get away.  The doctors would like him to get evaluated by a child life specialist.   Help him deal better.  We are also going to do another evaluation with physical therapy.  He has a little trouble lifting his leg into his pants when dressing.  He is also very cautious.  Very cautious.  He tends to hang on to things for dear life for stability.  Its not a weakness per say but there is definite signs of maybe some overall residual muscle damage/weakness. 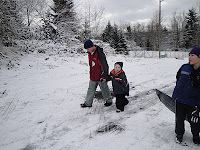 Gary is doing better and better.  Each day that goes by, you can see the effects of Rituxan kicking in nicely once again.  We just thawed out of a snow and ice storm.  No power for 2 days.  Gary was very inconvenience, lol.  He kept running over to things to see if they would work.  He asked if we had a little power.  He was confused because the water still worked.  We had an awesome time sledding.  Gary loves it and is able to play in the snow just fine.  Walking up the big hill over and over again.  He does have a cough that is bothersome but only at night it is really bad.   Think he just might have the sniffles.