Thank you to our friends, The Morgan Family, for donating to Cure JM.  Our Scentsy Representative, Debbie Evans, held a party with Estela.  Estela donated the commissions to Cure JM.  A donation of a guests choice, Tina McGann, chose Cure JM.   THANK YOU THANK YOU THANK YOU.  I love huge hearts!
If you need anything from Scentsy, here is a link to buy from ORDER HERE

Thank you Debbie, Tina, and Estela.   Love your heart!

Posted by Erika Bradford at 4:08 PM No comments:

Our clinic check-in went pretty good.  Doctors were running behind.  We were greeted by a new fellow who only knew of Gary by his name.  She didn't introduce herself.  She just began chatting.  I have to admit I wasn't in the mood to chat it up with a new doctor.  But I do like to hear myself talk.  Especially about a subject a know extensively.  As I updated her on the latest and greatest, she responded with, "I know you have struggled to get this under control."    It struck me I am don't favor the speaking with the fellows first.  I often tell them things, then forget to repeat them to our Doctor when she comes in.  Yesterday seemed rushed and chaotic.  I think it was because they were running behind, I needed to get back to work, and Gary was in no mood.  The fellow began the strength test.  As Dr. E entered she took over with the tricks she had established with him. He still was not cooperating which is frustrating.  I get distracted by his behavior, rather then going over the important things.  There were a few spots on his skin that I discussed with her.  She wasn't concerned.  The fellow repeated a few times about how difficult his case was and is.  We talked about his hoarse voice.  I think we are satisfied with trying to get it to resolve itself.  I guess.  Capillaries on his fingers,  a few fingers are almost normal.  I few are far from it.  I asked the doctor if that is common.  She said  yes.  One finger ok, the next not.  Don't bother with the why.  Strength is near 100%.  Gary was saying ouch here and there with his leg strength tests.  I told them I don't think that is a true pain.  Gary was giving there chains a yank.

Our doctor wasn't as excited as I was.  Pleased yes, but seemed cautious.  I am glad for this.  I appreciate her conservative approach.  Our first wean started last month.  The wean off was her.  Instead of every 4 weeks, we are not checking in every six weeks.  Our new taper is the small amount of steroid we are on.  We are going to rock that between 1/2 ml and 1 ml for the next six weeks.  In two weeks we have IVIG and lab checks.  She will also be checking T-Cells.  If they are back, we will run Rituxan again.   I felt like her head was full yesterday.  She seemed distracted and very busy.  She always expresses her confidence in me.  How they trust me and how in tune I am with him.  I appreciate that, but there is an immense fear.


So here we go with continuing the great taper.  We tried this taper last year.  It didn't last long.  Do things feel different this time.  I am not sure.  I think they do.  With methotrexate, cellcept, tacrolimus, enbrel, ivig, and rituxan and plaquenal on our side, just maybe.

There is no title to this because its not about Gary's disease.  Well, it is, and it isn't.  We are having a hard time right now.  Surrounded by blessings.  Definitely.  But fighting.  I am sure like a lot people are right now.  I feel like my hands are tied though.  We are scratching to hang.  Hang on to our house.  Struggling to even eat sometimes.  If it weren't for my family, I shamefully admit I am not sure I would be able to put a healthy meal on the dinner table.  My husband works hard.  But with all the price increases, it starting to hit us hard. We still are on financial aid at the hospital.  Blessing.  But even gas to get there has been a part of a strategic planning.  *Note to all children:  Be nice to your parents.  VERY NICE. Because even at 37, you depend on them.  I struggle with myself alll the time.  We can't afford to live in this house anymore.  I am torn and heartbroken at the thought of not being able to bring my baby home to his beloved house.  His beloved playset.  The neighbors.  So easy right.  I get a full time job.  That is what we need.  We need double our income to make everything ok.  Poisonous dilemma number two.  I get a full time job.  What do I do with my baby with no immune system.  Drop him in a day care?  I feel like that would be dropping him in a war torn germ country.  It makes me feel neglectful, bad, and sad.  I want to rise above this.  There is a way. He knows our needs.  I just wish I wasn't so very human.  Car broke down.  Ipod broke down.  And broke my 45 gallon fish tank.   Perspective is my friend right now.
Posted by Erika Bradford at 8:35 PM 1 comment:

"I feel fine Mom.  I don wanna go to get pokies.  Tell dem Mom.  Tell dem I all done now."
"Da evereebodee get pokies Mom?"
"I all done with this. I not sick" 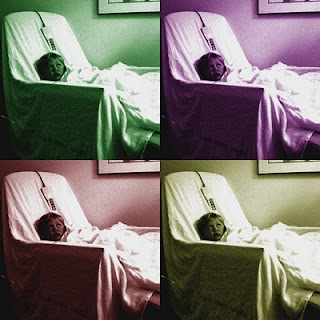 Someone is getting older.  I see retaliation in my future.  I sure hope the disease is done because Gary has inside information that his 2 and 3 year old mind could not grasp.  The good news is his labs were beautiful yesterday.  No signs of anything, well besides calcinosis and few cuticles that look grubby.  We have had a few things I was keeping an eye on.  A few spots in his arm pits were looking vasculitis.  But hasn't done anything so I felt better.  Calcium deposits have not increased, no new ones, so that is good.  All in all I love the trend we are on.  I am really looking forward to our clinic appointment in two weeks.  Which med gets lowered first? : D

I so look forward to the day when he doesn't have to take any of this.

Our infusion went great.  Nice and smooth.  I gave him his sedation.  No vomiting, just heavy tears for the IV start.  I gave the nurse the honor of starting his IV.  I told her he is not a hard poke anymore.  He once was because of the steroids but he rarely gets poked more than once.  She did it.  IV team has been doing it every time for 2 plus years.  I heard her celebrating at her desk with the other nurses that she did it!  Giggles.  She did a great job too.   A little to much tape but she put a big IV in since we were going to be there all day.

Gary had the whole boat this time.  Methoprednisone, Pamidronate, IVIG, Methotrexate, Enbrel, benadryl, tylenol.  It made for a long ten hours in the infusion clinic.  As much as he is started to grasp the concept of all this, he still doesn't.  He sleeps through the infusion, not by his choice.  Once he wakes up, the game has started. Instead of saying, "I don't feel good",  he just screams.  Cries and screams about everything.  The ride home was like a violent sea for him.  I constantly was instructed to roll the windows up and down.  He tried to sleep.  He tried to stay awake.  When we arrived home, he just wanted to play.  I think instinct drives him to do the normal thing.  He just wants to not acknowledge however it is he is feeling by playing.  But even a glimmer of stimulus like throwing the ball wrong to him and he goes into hysterics.  I try to get him to come inside lay down.  Makes things worse.  He doesn't care if the sun is doing down.  He needs to play.  My friend Summer gets the medicines that Gary gets.  A doctor recently told her the medication she gets "isn't that bad".   I beg to differ.  I want to slap in one in the face with my "differ".  My son is not this child after getting these drugs.  He is a much kinder, fun-loving boy.  He goes away when the medications that keep him healthy enter his vein.  He screams and hurls insults, in the same sentence breaks, then screams he sorry and he loves us under sobbing tears, then back to the threats and pain.  So yes, these medicines may not be the worst, but they are that bad.

A friend wrote me how great Gary looks.  I couldn't agree more : ).  We have been here before, when things seem to turn a corner.  He gets this angelic appearance.   Still with all the stuff he is on, preschool will have to be at home.  We did have a run to the pediatrician 2 weeks ago because he was having trouble going number one.  All was clear though.  Just irritation.

*Other Children.  School is in session.  They fell back into there routine nicely.  Gary misses them.  Our family eats dinner after 830pm almost every night.  Trying to keep the siblings active and heathly while juggling all the rest like running (which I haven't done in 3 days now), house keeping, working, cheer leading, not paying bills (lol), and tracking school progress, I feel like just staring at the wall for awhile.   Like that song says, "I don't feel like doing anything".  Oh but putting on my chemical suit and cleaning the bathrooms in this house.  Yucky.
Posted by Erika Bradford at 9:13 AM 2 comments: