Thank you to everyone in my life that rearrange their life to help our family accomodate the infusion.  And not thank you to everyone who didn't.  LOL.  That's alright.  The world does not stop spinning because of a child's medical condition.  But I don't know.  If I got an email that said, "my son is going into Children's Hospital for a unexpected chemotherapy infusion, could you help me reschedule?", I vow to do everything possible to help you.  Thank you to my baby sister for always saving me and being so willing.

I was offered to do our Rituxan infusion in the infusion center.  Hmmm.  I love my own bed.  Sleeping is so nice. But having a flash back to last week, I had to insist on an overnight infusion.  I don't care what it cost.  I don't care who is annoyed.  I don't care what needs to be rearranged.  It has to be this way for the good of my little man.  And what a little man he is becoming.  He is slowly but surely maturing.  He is able to pick out the good parts.  He is able to pick out the bad parts.  I was impressed with this.  He knew he was going to be getting an IV, but looked forward to picking out a toy from the prize box.  (If you have ever donated to Children's Hospital in Seattle, my little boy is the one you bring an joy to!  A distraction that pulls him through having to have a large needle rammed into the back of his hand over and over again for the past two years.)

We first stopped off in clinic.  Clinic is always fun.  We have a really great fellow (intern) who did a great job examining him.  She tested him thoroughly for strength.  We chit chatted. Since we had just seen her six days ago not a lot had changed.  She did mention she heard that I had called on Friday.  Yes I did.  I was having a little panic session because usually after a pulse of steroids and IVIG,  he is pretty white.  An angelic look comes over him.  The flare he is in however didn't let this happen.  He was redder than ever which made me so nervous.  It took me right back to the beginning.  I was just fearful he was going to get sicker with JDM.  The nurse talked me down.  Told me who was on call for the weekend.  I was certain at the time he was going to need another pulse. I inquired about the weekend.  Just wanted to let them know that I hated all of it and we may need to come back.  But breathing and embracing a calm is something mothers have to do.  I was close to pulling the emergency cord, (metaphorically speaking) but talking myself down, once again, my son has a disease.

I inquired about a bit information that our main rheumatologist mentioned last week.  When giving IVIG and Rituxan at the same time, IVIG neutralizes Rituxan.  Come again? Because the first 4 doses of Rituxan were all given with IVIG.  I didn't want to discuss it at the time because my brain was still processing this.  I didn't want to face.  I came home and posted it on the JM Support Board.  I felt a little guilty afterwards.  It struck me, what if I didn't properly gather all the facts.  I decided to wait to get the full explantion.  Enter the senior rheumatologist.  She explained that currently it is a theory.  That this has not been proven, but if you think about how IVIG works and how Rituxan works it would make sense that the two cancel each other out. IVIG clings to antibodies to rid of them so they will stop going after his body.  Rituxan is a antibody that clings to cells that cause inflammation.  Hmmm.  I hope I got that right.  Don't quote me.  Anyway, she further explained it is about a style.  They have kids that with diseases that are treated with same medication who need to be treated quickly.  They do not hesitate to give them together.  They have seen Rituxan work but still its not know if it is doing its full job when giving with the IVIG.  I kind of apologize to my JM Mommies but then again I don't because its not all together true or false.

CALCINOSIS
Gary's calcium deposits have been on the move.  I am a little baffled by they ones that are on the backs of his knees.  They decreased in size but now have started giving him trouble on his skin.  Like they are trying to exit.  They have increased in size around his elbows as well.  A new one has come in on the bottom side of his fore arm along the bone.  It feels kind of big.  The calcium on his bum is also bigger and showing signs of vascular eruption.  I made that phrase up but in my terms, little purplish dots and rough skin around the calcium site.    I did get some good pictures.   Sadly, they are big enough to show up on camera now. 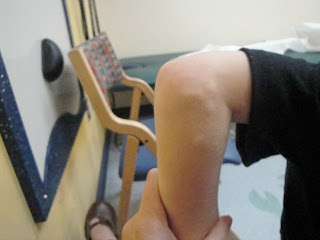 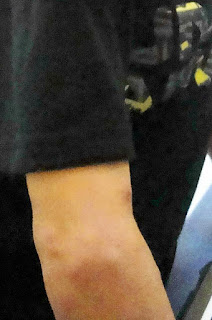 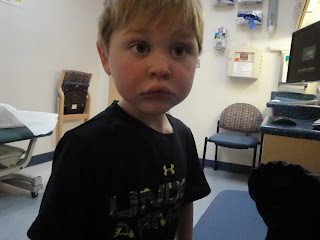 Last month I was worried about the taper of steroids.  But time and time again, there is not much I can do about it until it comes to past.  Because even I admit, "what if I am wrong".  But walking into the hospital on Thursday I was so nervous.  I was nervous because I knew I had to get my Mom on and make sure things got done the right way.

Somehow we scored a bed this time in the infusion center which was nice!  It is up near the nurses station so the all the nurses step in and help.  We had like 4 nurses in our room when we were getting checked in.  I found my main nurse and explained I was about to be a pain in the butt.  I asked her if she could page rheumatology before they started any medications.  They are always compliant for the most  part.  She dropped a bomb shell right away telling me our rheumatologist was not in town.  8 O  What?  No.   "I talked to someone.  He said he was in a meeting and would come when he could."  Well. well. well.  I knew exactly who that was.  I protested.  I even called him a harmless name.  Our nurse desperately scrambled trying to get another doctor to come.  It was too late.  There he was.  It really was no big deal.  He was with our fellow who saw Gary last month.  I told our doctor it was nice to see him.  It was too.  Just wanted my rheumatologist.  But settle for two fellows.   Here is what I have been seeing:

Heliotrope rash, and facial swelling.  Some calcinosis had penetrated the skin on the back of his knee.  It is showing signs and getting larger on his backside.  They agreed.  I don't why I felt relief and panic at the same time. 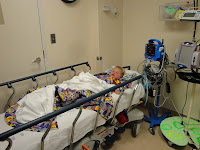 We had a clinic appointment set up for 215.  We checked in at 1015.  There was no way that was happen.  So they accommodated and came to us. In walked our doctor who was out of town.  I told her I was having a shcitt fit she wasn't there.   Yes.  Yes I did say that.  I was just so relieved she was there!  She examined him and said, "yes, he is flaring."   Changes in capillaries in his fingers with so many other signs.  We are going backup on our steroid which is only 1/2 ml but enough to make a difference.  We are going to run rituxan again at the end of the week.  Gary's labs came back fine.  But he is still flaring.
The trip home was the pits.  Awful.  Traffic made our trip into a 2 1/2 hour ride.  All's he wanted to do is lay down.  He cried the whole way because he just wanted to sleep and couldn't.  Side effects from IVIG seem to really be increasing.  He nears vomiting and is so miserable.  I feel terrible.  I wish I could have pulled off, got a hotel, and tucked him in for the night.  He would have loved that too.  Would have been a good distraction.  Getting him to our bed, not his, was on the menu though.  I was close to just making him a bed on the back seat.  Belt him in somehow.  A new item to bring, pillows!  My poor little bunny.  I hate revisiting this.  We need to stop this in its tracks or he is going to get full blown sick from it.
I still cry.
He recovered but has been tired.  He was running with his brother and had to stop and grabbed his legs saying owe.  Ugh. 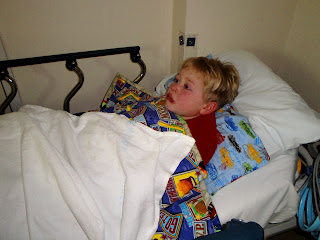