Your not the one.

I tried.  I know we have only been in a relationship since December.  Harshly enough, we are breaking up.  You don't block muscle weakness.

When family members notice strength isn't what it was.   When weird rashes appear that you try to explain away.  You make me grieve.

But if you need to some day.  I don't want you to be in pain because of me.

But know, we will FIGHT.  I will drag you there if I have to baby!  F to the U JDM.  That is F to the U to the returning muscle weakness.   To the labs that don't relieve themselves.  Oh, I got this.
Posted by Erika Bradford at 5:40 PM No comments: 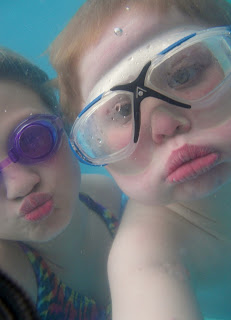 Happy 6th Birthday, Gary
Posted by Erika Bradford at 10:12 AM No comments:

This month as been pretty good.

Gary had weird rash pop-up on his face these past couple weeks.  It was confusing for me because the rash was exactly where a dermatomyositis rash would be.  Cheeks, across the eyes.  But this rash was a little different.  It was raised, little bit of dry skin over the top of it, and it was on only one side of his face.  Last week he woke up and it looked like it was making its way down the side of his face to his neck.  I called the doctors.  I explained what was going on.  I thought maybe he was having a reaction of some kind to the steroid itself.  We are after all still getting pulsed once a week.  We keep expecting see improvement with the pulses but we weren't all the sudden.  In fact, the methylopred or whatever is in it or the methotrexate or ect., was making it worse.  I was concerned he was allergic to something or JDM was being activated somehow.

I love my doctor.  She takes the time to listen, troubleshoot with me.  We problem solve together.  She checks in with our lead doctor.  Our main rheumatologist was not interested in making any changes.  I had suggested trying a different kind of steroid.  I know they have them but I had yet to do any research on them.     She didn't want.  Instead, they ordered a dose of IV benadryl and tylenol.  The reasoning was because the only time he hasn't reacted or he walks out of the hospital looking like a new man, is with the IVIG.  IVIG has given us trouble in the past.  This new brand however, stopped that and all seems well.  So they talked about the difference between the dose of methylpred he gets with IVIG and the weekly infusions.  What was the difference?  The benadryl and the tylenol.   Worked like a charm.

Once the IV benadryl went in, the rash on his neck instantly started to go away.  It took another 24 hours for the one around his eye to go away but, it seem to solve a problem.  Now, WHY?  I have concluded when we go to our next appointment in clinic next week, I will have them point me in the direction of the allergist people.  I wanted him tested for allergies.

SICK OF IT
I am growing tired of the media and there reports on what is causing autoimmune diseases.  Since Gary has been diagnosed I tend to pay to the news when the title of the article reads, "Autoimmune" and scientists.  You know, things of that nature.  Of course it is going to catch my eye.  So far I have read the following of too much causes autoimmune diseases:   SUGAR, SALT, GLUTEN, PROCESSED FOODS, SUN, GENES.  I would like to add my own.  The WIND, RAIN, GRASS, CLOUDS, SKY, YOUR MOM, YOUR DAD, YOUR CAR.. . . . . . . . . . ..........I am aging.  My tolerance is less.  I do feel a bit arrogant and ungrateful with the information shared.  Because what is comes down to is of course, I want to know.  If we truly new then we would know where to pull the plug on it.  I admit it triggers my "FAULT" emotion.  If indeed it is salt, well then, its my fault.  I fed him too much salt.  I fed him too much sugar.   But if that is the case then why doesn't his siblings have it.  Why doesn't my best friends son have it?  I will continue to read the articles.  But I don't know what to believe.  I have really started laughing it all off because it is frustrating for a parent.  I suppose I compare it when they first introduced cigarettes.  They marketed it was healthy.  People believed it.  I know that is a whole different realm.  I was pointed out the media effect I suppose.  Only God knows.  I can't wait to get up to heaven.  I will ask Him, "so, what is the cause really? don't worry I won't mad You can tell me."  No worries, He won't be mad at me for saying that, He knows my sense of humor.  He gave it me.

SCHOOL
Gary started at at new school.  The schedule of this school actually isn't too bad at all.  I was fearful but out the other two kids, Gary is doing very well.  I met his gym teacher yesterday.  He was very nice.  He made me smile because he admitted he was nervous with Gary.  He asked about his limitations, and his port.  I told him that, yeah, he could take hit for someone, and it theoretically could knock the port out of placement.  I explained however, it has been in since June.  Gary runs, jumps, wrestles, swims, bathes, everything.  I told him not worry.  I think Gary does a great job protecting what he needs to protect on his body.  I am glad that the transfer as gone smoothly.  Excellent school.   He goes full day on Monday, and Tuesday, and every other Wednesday.  I switched his weekly pulses to Thursday, gives him the weekend to recover.  Nice, huh?
Posted by Erika Bradford at 2:48 PM No comments: