Battle of the Medications

Our monthly infusion was scheduled for the 26th this month.  It was a little hard packing up and going to the hospital with fresh new toys, and clothes stacked in our bedrooms, waiting for us to play with them.  But it was better then being there Christmas day.

The clinic was quiet has a mouse.  Gary and I sort of enjoyed it.  We were able to report to our doctor that things were fine.  Nothing had changed which means Gary is holding.  Doing well with strength.  Tiny little things that can be dismissed.  Skin rash, looks a little better.  Nail folds, if I can't see any changes then I say thumbs up.  The doctor didn't throw a party over them.  I asked how they look, she shrugged and said the same.  Well, ok.  I am fine with that.  Reviewing quickly, last month we stopped Cytoxan, started Abatacept/Orcenia.  We had tried in November to go from every 7 to every 10 days between steroid infusions.  That failed.  So we went back to every seven with the start up of Orencia.   The doctor decided to tweak a few of his support meds.  We give him ceterzine at night for itching.  She wants us to switch back to benadryl.  She also wanted to switch his tummy protector.  Ranidadine to Omeprazole.  The reason was she wants to one last time target the hoarse voice.  This has all been visited.  This has all been done before but I thought, why not?  I suppose I feel a little bit cynical.  My feelings at first were ambivalent   But with my  sleep deprivation alleviated, I am flipping between well this is dumb and why not.  But in the big picture, meeehhh, fine.  Lets do it. Fine.

8pm
There is one thing that you don't want to see.  Doctors in your hospital room at 8pm, the day after Christmas.  Labs came back surprisingly higher.  His LDH doubled.   700 to 1400.  A few other enzymes are creeping up.  We were scheduled to come back in January for another round of Rituxan.  That was suddenly moved up to Wednesday of next week.

We are upping methotrexate again. 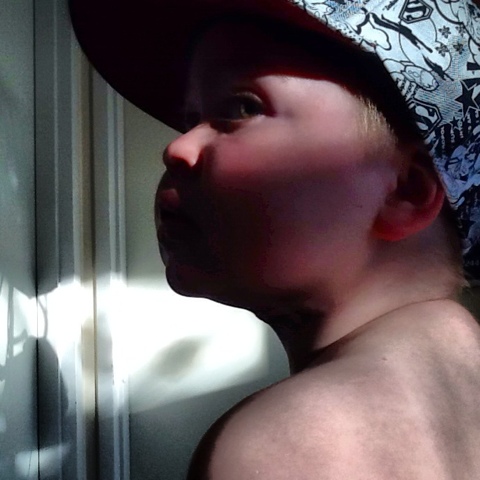 Posted by Erika Bradford at 1:07 PM